This post is about why it is important to review each and every slide or negative scan and why I re-scan those images that look out of focus on alternative scanners.

There I was happily editing some old photo images and came across a few that were out of focus. Its quite unusual for pictures to be as blurred as these ones so I made a note and carried on. Once I had completed the task I went back to the blurry pictures and pulled out the originals. The original 35mm slides looked good, apart from the fact they were very faded there was nothing particularly unusual about them so I put them through the Nikon scanner once more, having put through a calibration slide first. The result was the same. I could not persuade the scanner to focus correctly. I took the slides and ran them through an Epson scanner, at high resolution and with ‘Silverfast’ dust and scratch reduction technology. The results were fine. Baffling!

I returned the scanned images to a very happy customer who informed me that the pictures in question had been taken in Canada back in the late 50’s It would seem that the film base used was not being recognised by the Nikon, perhaps because of the fading. Before you ask did I use just one Nikon the answer is no! I have three and each of them had the same problem with these particular slides.

This episode is a reminder that even with well looked after, well calibrated scanners there can be unexpected problems thrown up to test our mettle.

I have not asked permission from the customer for the images to be included so I am afraid there are none for this posting.

On another note – have you noticed that I change the header image on the website quite frequently? The current image is of the Cathedral at the World Heritage Site in Kirkjubour just outside of Torshavn. This is the Faroes most important historical site with the ruins of the Magnus Cathedral from around 1300, the Saint Olav’s Church (Olavskirkjan), from 12th century and the old farmhouse Kirkjubøargarður from 11th century (the links will take you to the Wiki pages). The photo was taken about a kilometer offshore from a moving boat with a 70-200mm dx lens on a Nikon D7100. I was quite pleased at how well the cropped image came out.  The original image is reproduced below: 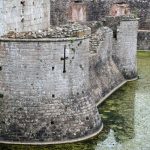 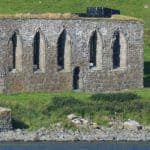 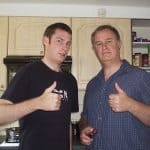